With a little help from my friends
by Tom Ryan

Ronning Landscaping, Inc., is a family owned business that was established in 1972 by Mike Ronning. The company specializes in commercial installations, including shopping centers, schools, office buildings, parks and residential areas.
Tripling in size and profits, Ronning Landscaping’s future is bright. The company’s success in turning a small family business into a well oiled machine has earned them an IPA Business Today magazine “Business of the Year Award.”

Mike Ronning founded the family landscaping business and had a dream of one day turning it over to his children. He built his successful landscaping business with the help of several of his immediate family members. His sons Michael and Robert, his daughter Cheryl and daughter-in-law Jennifer all played a major role in the company. Michael ran the field operations, Robert handled the finances, Cheryl was responsible for sales and Jennifer was the estimator.

Like most businesses, there were a few bumps in the road. The difference is that Ronning Landscaping conquered the challenges that face small businesses and came out on top.

Mike Ronning started his business in 1972 with a borrowed 1962 Chevrolet pickup truck. The majority of his work consisted of installing colored rock around mobile homes in the Phoenix, Ariz. area. In his first year of business, his gross sales were $6,000. They quickly doubled and then tripled in the next few years. Although sales were good, profit margins were not, and the company was struggling.

They learned from previous mistakes and grew the landscaping business slowly over 20 years, debt free. By 2000, the gross sales were $2.8 million, yet they were running their business out of a 12’ by 12’ building in the backyard of their home.

“In 2005, the company had grown to a point where we felt we couldn’t handle the growth anymore, and we were looking to sell the business,” said Robert.

Not long ago, Ronning Landscaping was a typical family run business. Similar to the majority of family businesses, the line between where the business ends and the family begins was not clearly drawn. The tensions caused by the lack of a welldefined business structure caused problems within the family.

While the family problems in running a small business were quite evident to all the Ronnings involved, the business problems caused by a lack of structure were less evident. Too often, problems resulting from a lack of internal efficiency within a family business are not readily noticed on the bottom line. The problems are hidden from view in the unrealized potential of the business to grow and prosper. This was true for Ronning Landscaping as well.

Ronning Landscaping asked IPA to come in for a checkup in January of 2006. At that time, gross sales were $4.8 million. By the end of that year, after work with IPA was complete, Ronning Landscaping had sales of $5.8 million, and it was managed with ease.

The company operated out of the 900-square-foot basement of the Ronning’s home. Close quarters made working together as a family even more stressful than it may have been if the company had larger offices. Like so many other family businesses, having the ideal space for work is often not a luxury that the business can afford.

With the close working quarters and no formal organizational structure, Ronning Landscaping ran more like a mom-and-pop operation than the true business it was. Everyone stepped over each other, literally in the space they occupied and figuratively in the way the business was run.

“Everybody was more or less doing everything,” said Mike. “No one was doing anything specific.”

With the lack of internal organization, some members of the family found they couldn’t get their work done because others were continually assigning more projects to them. Cheryl said she always seemed to be the one that other family members delegated work to, and this left her with less time to sell. Less time to sell meant less work for the company and less revenue, but no one seemed to understand the impact on her primary responsibility.

Tasks were delegated without any forethought as to how it would impact the revenue of the company. But without a proper delineation of responsibility, Cheryl accepted what was given to her by her siblings simply because that is what is expected within a family. Without the structure of a corporation in place, no one knew how the company should be run to make it more productive and profitable.

Today, Cheryl says that because of the work IPA has done to define job responsibilities, she now has more time to sell and grow the company. In addition, she has learned what she is responsible for and how to delegate tasks to be properly completed by another employee. These actions played an important role in helping the company triple its sales.

Jennifer said that IPA helped her learn how to secure more contracts for Ronning Landscaping through a better understanding of the estimating and bidding procedures. According to her, before IPA became involved, there was more guess work. Now, estimates are based on true costs for both time and materials. IPA developed a system that includes all the information needed to properly estimate the aspects of the work to be completed. This resulted in more profitable work for the company.

One of the unforeseen benefits of reorganizing the business was that by being better organized in the field, Ronning Landscaping could take on more work. Michael Ronning said that prior to IPA’s consulting, he was doing all the supervising in the field. While there is only so much one person can handle, the common management structure within a family business is for the family members to accomplish everything.

He learned how to restructure the management of the ongoing jobs in the field with the use of project managers. While Michael was still in charge, the restructuring allowed both he and the company to take on more work. Creating the right organizational structure was the key to Ronning Landscaping’s growth. Without the new structure, Ronning Landscaping had reached its limit for growth and expansion.

IPA’s reorganization of the business was focused not only on the field operations, but also on the larger goal of turning Ronning Landscaping into a corporation. Included in such a transformation was the new accounting system with entirely new reports. Robert said that the old accounting system was both difficult to use and understand. IPA converted the system they had been using into QuickBooks, which Robert found much easier to understand. In addition, IPA created a number of managerial reports to help him understand every financial aspect of the business so that he could make better decisions by having better financial information.

According to Robert, prior to the reorganization, the business and internal dynamics of the family business were so bad that he was willing to give up the potential of someday being one of the owners.

“We all wanted to quit—even if we had to go work at a grocery store,” said Robert.

Mike Ronning said the stress over how to run the business was so great that he saw no alternative but to sell the business in order to bring peace to the family.

Instead of selling the company, the Ronning’s have been so successful at turning the business around that they have expanded. Since IPA’s internal reorganization of the company, Ronning Landscaping has tripled its revenue and significantly increased its profits. In addition, the company was able to move to new facilities to provide a more productive work space for all the managers and key employees.

One of the big benefits Robert saw in Ronning Landscaping after IPA reorganized the business was defined job functions. “Before, we all had our hands in the pot. Now we all have our specific duties.” What follows from defining duties and responsibilities is an improvement in everyone’s productivity.

IPA also developed a profit sharing/incentive plan for all the Ronning children. This plan was designed to keep the family members focused on the ultimate goal of maximizing the business profits. A pre-determined level of profitability was set up for the father and mother, who own the business, with the excess profit to be divided among the children.

The new profit sharing/incentive plan created a new budgeting dynamic within the business. In the past, many expenditures were made simply because they seemed necessary. Now, many more questions are being asked about the impact a proposed expense will have on the bottom line and whether the benefit of the proposed expense outweighs its impact on the profits of the company.

The Ronning siblings now have an internal discipline to hold down expenses. Everything they save will result in higher profit sharing bonuses at the end of the year. This certainly is in line with Mike’s dream of creating a successful business for his family.

After reorganizing the family business, IPA’s tax division also reorganized the legal structure of the business to protect the assets of Ronning Landscaping. With the new legal structure in place, the family is protected and all they have worked for cannot be lost by legal judgment caused by an employee driving carelessly in a company vehicle. Moreover, the forward-looking plan developed by the tax consultants allowed Mike Ronning to put more money away in tax-deferred retirement plans than he ever thought was possible.

It took an objective, third-party point of view to help the Ronning family understand that there was a solution to their problems. They did not have to sell their family business and give up on the dream of building a business to be passed down through generations. To make the transformation from a “mom-and-pop-shop” successful, the Ronning’s needed more than IPA’s objective point of view. They needed IPA’s expertise in restructuring the family businesses.

IPA provided a complete restructuring of the business and has put in place the organizational, legal structure and profit sharing incentives to benefit all of the Ronning family members. Ready to sell their business out of the frustration and family stress, the Ronnings saw a new landscape for their business—in place of the old.

In 2007, the company was ranked third of all commercial landscape contractors in Arizona by Ranking Arizona magazine.

The Ronnings believe they have impacted their community and society by serving, giving and participating in outreach projects and missions. Mike and Ellen are sponsors of a Honduras missionary family, and all family members are deeply involved in their church groups. They have been a long time donor to Arizona’s wildlife through the Arizona Elk Society, Arizona Desert Bighorn Sheep Society, Rocky Mountain Elk Foundation and the Arizona Mule Foundation. Each of these organizations helps preserve the animals and existing habitat and create new habitats through water and grassland development projects. In 2007, the Ronnings contributed $100,000 toward these charities and some others. In 2008, the total was $275,000 toward charities.

“Being a family business, we strongly believe in keeping the family together,” said Robert. “All of our participation in charitable events and organizations are just our way of helping contribute to the community and other families.”

While Ronning Landscaping has tripled in size and the profits have bloomed as a result of the restructuring, the family has benefited in ways more important than money. In saving the Ronning’s from selling their business, they saved the business for their children and also preserved the most cherished dreams of their father and mother. Today Ronning Landscaping has a bright future. The business has grown, the profits have bloomed and the family has put down new roots as a well-run landscaping business.

Southwest Contractors Best of the Best Award for 2003 Church of St. Thomas 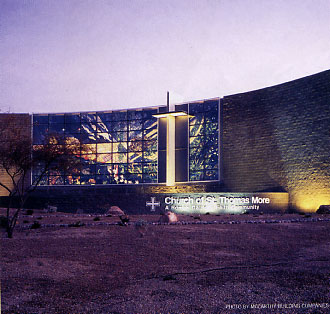 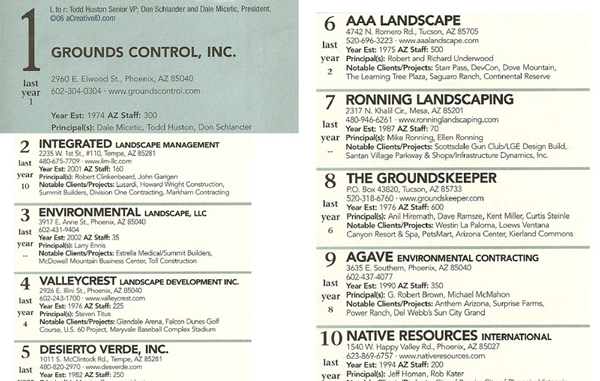 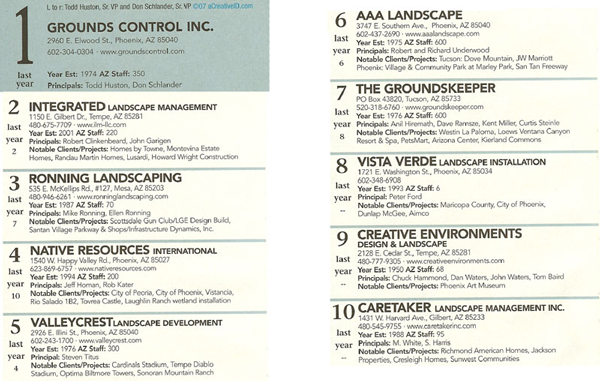